History of the Property 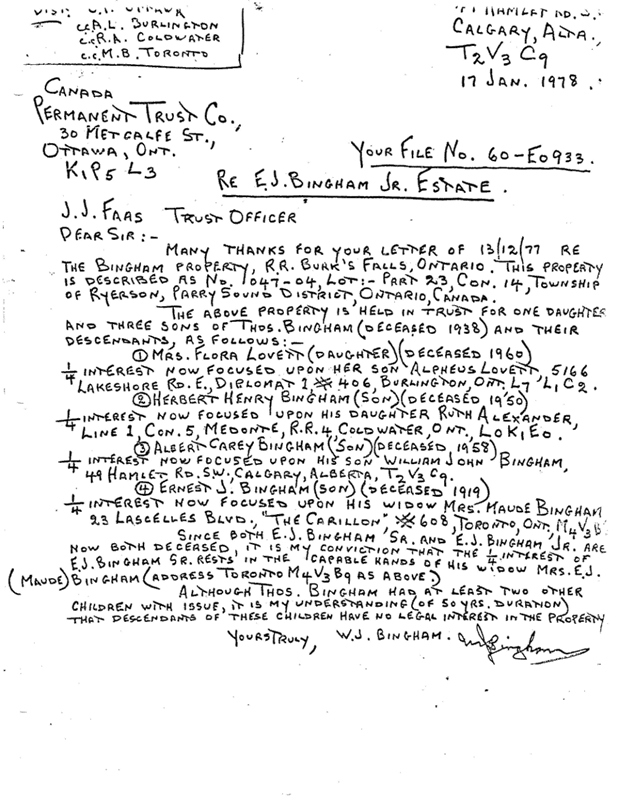 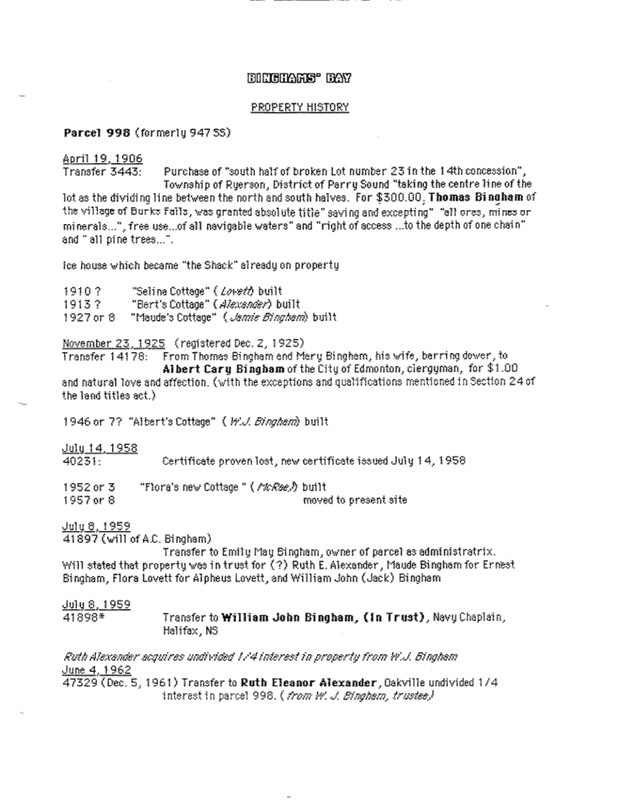 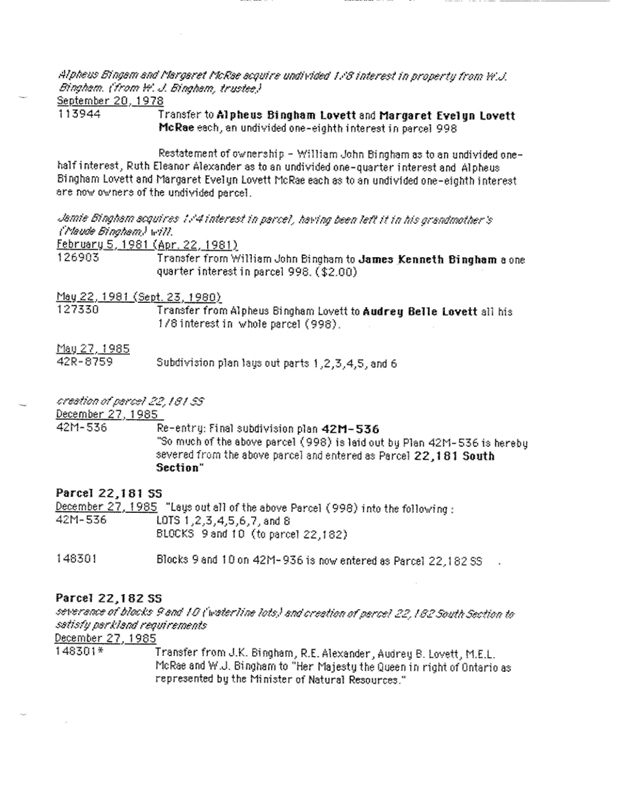 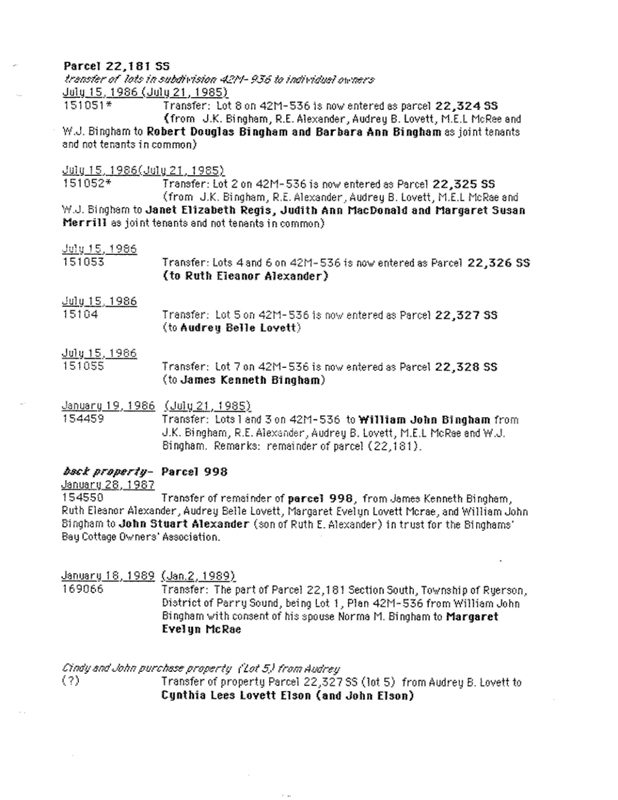 Where is Bingham's Bay?

Where is Binghams Bay? In the picture if you look across from Geddes Landing (currently the Merswolkes) to the east shore, the Bay is just hidden to the left but the property extends right to the small Echo Rock. It was bought in 1906 and included 1900 feet of shoreline.

My grandfather, Thomas Bingham, was Minister of the Baptist Church in Burks Falls from 1900 to 1908. He had 4 sons, Will, Bert (my father), Albert and Ernie and one daughter, Flora; all of whom you can see in the back row of the family photo taken in 1913. The 4 sons all became Baptist ministers and the daughter Flora, a nurse. Will was also a doctor and Ernie a lawyer. They were a striking group, all of them quite tall, and our neighbour's were known to comment, "those aren’t the trees walking over there, those are the Binghams". Interestingly the 4 youngest children in this photo are all living and all in their 90’s and Marg McRae and I (the shy one in the photo) still spend our summers at the cottage. 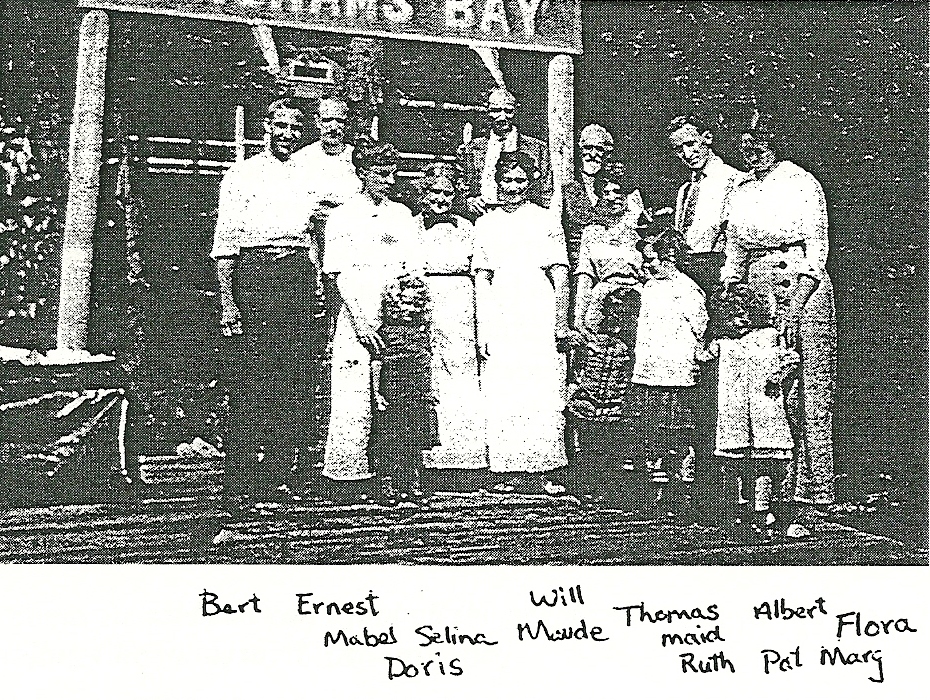 One summer when visiting their father in Burks Falls some of the family took the steamer down to the lake and then rented a rowboat at Geddes for a tour. The bay property captured their interest and they decided to buy it from the Waltons who operated the steamships at that time. It was an enchanting site and was believed to have been a summer camp ground for the Algonquin Indians who traveled between Georgian Bay and Algonquin park by way of the Magnetawan River. Through the years many arrowheads had been found near where the Lovett cottage now stands and I remember watching the descendants of those original Indians traveling up the lake selling their handiwork to the cottagers.

There was a small shack already on the property and the family used that while they built their own cottages. Albert built the first one in 1907 on the point of the bay. Flora, whose husband, Dr. Lovett, had died in the flu epidemic of 1919, purchased this cottage from Albert sometime in the 40’s when he and his family moved out west. It is now owned by Cindy (Flora’s granddaughter) and John Elson. Herbert built the second cottage in 1910, which my family still owns and enjoys. Ernie died in 1919, but his wife Maude had a lovely cottage built in 1925 which here grandson James and Kay Bingham now own. In 1959, March, Flora’s daughter, built a cottage, which is now, owned by here three daughters; Judy, Janet and Susan. In 1968 Will’s son Robert built a cottage in Green Bay which was recently taken over by his niece Judy and Clyde Schipper. In 1973, my son Dave bought the 2,000 feet of shoreline property adjoining Binghams Bay that includes Echo Rock and built his family cottage in 1984. My daughter Gail and her family bought the Leserte cottage directly to the north of Dave’s in 1984.

My story is really about the early days, the "steamship days", which few of you would have known. To get to the cottage each summer we took the train, a sleeper, from Toronto at 11:00 pm. At Burks Falls the train went right down to the wharf and we were able to board the steamer directly. All our baggage would come in trunks which would be put off at the dock to be loaded onto the steamer. We would write ahead to the grocers, Mr. Peck and Mr. Sharp, and they would have all our food and supplies ready for us at the dock.

The steamer, either the Glenada or the Armour, would leave at 7:00 AM and the trip down the river was a wonderful adventure. We always looked forward with particular enthusiasm to the passing of the swing bridge and the entrance to the lake. It was an ideal way to get to the cottage, not only for ourselves but also for all our belongings.

Opening the cottage was another thing altogether. Both of the early cottages had large verandahs on two sides which served as a dining room/living room as well as having cots for sleeping. Our cottage had 3 small bedrooms and a living room with a beautiful fireplace made of rocks hauled from Echo Rock. Upon arrival the verandah furniture had to be moved out from the cottage, mattresses taken down from the rafters where they had been stored away from the mice, the canoes and rowboats taken from their perches on the dining tables, shutters removed from windows and all the bedding aired and dished washed. But no one ever really minded because we were at the cottage for the summer.

The south side of the lake was the first settled. The cottagers were nearly all professors, teachers or minister; people who had 2 months of holiday and stayed all summer. There were Professors Trotter, Hebner, Parks and follows: Dr. Barber; Reverend Baker and our 4 ministers. Dr. Barber built a 9 hole golf course behind his house which was a bit rough but tremendous fun. All the original cottages are still in service.

Our family didn’t have a motor boat until 1930, but 3 of the professors had launches which we envied. They only went out Saturday to Magnetawan to shop and on Sunday for a cruise around the lake. Although our gang was relegated to rowboats and canoes we certainly did not suffer for lack of fun.

In 1913 a fire swept through from Geddes to the other side of Echo Rock. The local farmers backfired behind our cottages and saved them from destruction. Although most of that area is now second growth, around the bay some beautiful, old, first growth trees still stand.

Our cottages were always full of relatives and friends and there was a strict routine for everyone. Up for breakfast at 8:00 AM and then, for the youngsters, the routine was; chores for an hour or two cleaning lamps, getting wood and water, cleaning fish, sweeping the cottage and verandah, bailing boats, etc., at 11:00 AM we were free and off to play at the dock or swim to the bathing beach. We often packed a lunch and went on hikes to the Beaver Pond, Echo Rock or Green Bay. At least once in the summer we had a lake picnic attended by all, including Garfield Weston and family who had a cottage on the north shore. Dinner was at 6:00 PM and after dinner two of us had to go for milk at the Borne’s farm behind Geddes on Midlothian Road. We also had to take Grandpa Bingham trolling each night. He was very particular about how fast we rowed and called us "shufflebottoms" if we moved but he always seemed to catch at least 2 or 3 nice pickerel. Each year there would be a boom of logs in the Bay and we would enjoy playing on them. Over time many of the logs escaped from the bottom and became the infamous "deadheads" that littered the bay and threatened the boats. Evenings were spent playing games. Crokinole was the family sport and we all became quite expert. Card playing wasn’t allowed but Chinese checkers was popular.

Saturday nights were a time of celebration, with a bonfire at the bathing beach. We children collected driftwood along the shore and built the bonfire. Everyone gathered to sing songs, perform skits, tell stories and jokes and enjoy roasted marshmallows. We didn’t have electricity, phones, radios or other modern conveniences but it is amazing how happy we were.

Meals were always on the verandah. To keep the food fresh for a few days a pit was dug under the cottage and lined with cement and a few shelves and it had a lid that you pulled up with a rope. It was all very basic but it seemed to work quite well, although it was interesting that whenever we had a thunderstorm the milk would go sour. On Saturday night the Clark’s, who farmed on the Midlothian Road, brought chicken or fish. Sunday was a day of rest. Church was held for many years at our cottage and later it went to Rockwynn. Grandpa didn’t allow us to swim on Sunday but if it was very not we could go and "lie on the water" for a few minutes. As we moved into our teens we became bolder and even learned to dance in Agar’s boathouse (now the Naftel’s) on Watson Island.

A highlight of our day was when the steamer blew it’s whistle to announce they were coming to our dock. We would eagerly gather at the dock and was to the tourists who were taking the day trip. If we wanted to go home or to Ahmic Lake we flew a white flag and they would come and get us. Professor Hebner had the mail concession and the boats would leave the mail for the lake residents with him. The cottagers would collect at 9:00 AM at his cottage as the boat came in and then sit on his verandah as he sorted the mail. It became the center of social life on the lake. By the late 1920’s things began to change as new roads came in and the steamers lost the mail contract and we had to say goodbye to the tradition.

Our family, like many on the lake, has been blessed with a wonderful heritage and every cottage is still being enjoyed by a direct great-grandchild of Thomas Bingham. We have had 4 reunions; 1967, 1980, 1988 and 1996 and each reunion has been attended by 50-70 relatives. The first two honoured Thomas and the Baptist Church in Burks Falls, who put on a lovely service and lunch. We have been so fortunate to be able to share such beautiful spots with so many relatives. 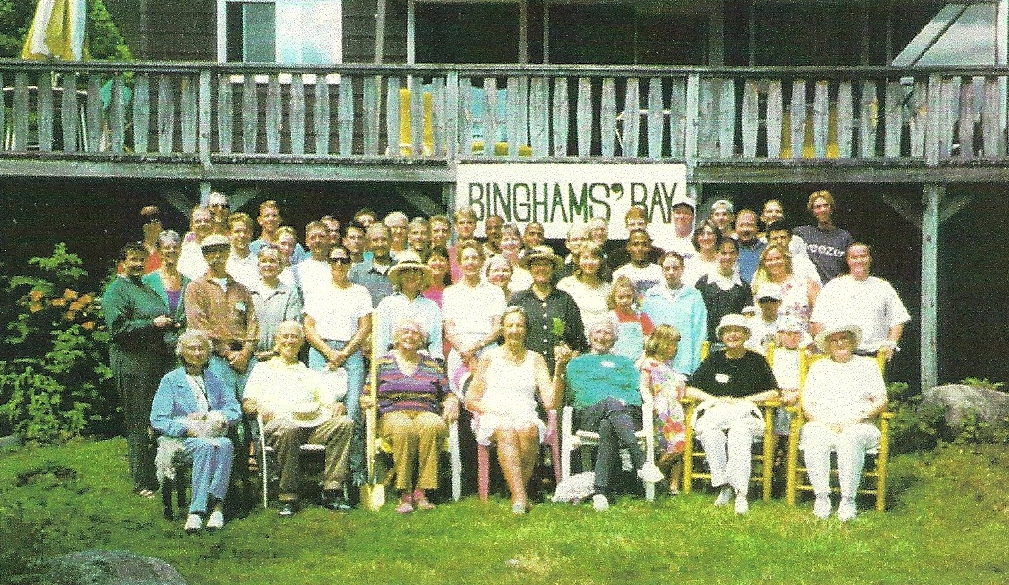 In passing: One day last summer I was telling one of my grandsons about the wonderful sunrise I had seen early that morning. Grandma he said enthusiastically, "I saw it too!" "Don’t tell me you were getting up at that time", I replied. "No, Grandma, I was just going home to bed".         These are certainly different but still wonderful times.

This Article was written by Ruth Bingham Alexander in the year 2000 for the Cecebe Waterways Association.